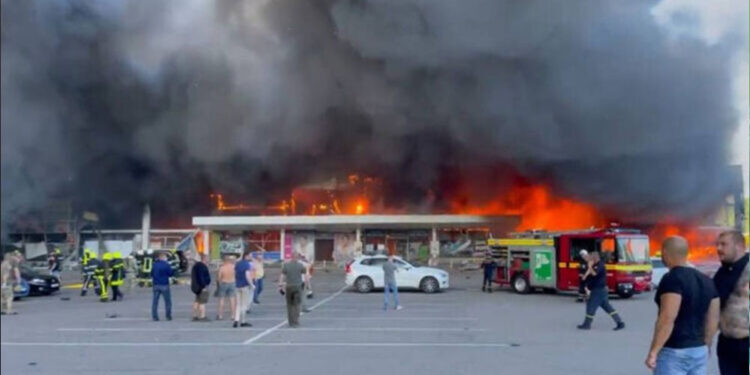 Kyiv: A shopping centre has collapsed in the Ukraine-Russia attack that took place on Monday. The shopping centre was situated in Kremenchuk, about 320 km south-east of Kyiv. As per reports, the Ukraine president said the attack is a “terrorist act” and the death rate is “impossible to imagine”.

According to the regional media reports, around 1000 people were inside the shopping mall during the time of the missile attack.

The Poltava Regional Administration leader said that 10 people were killed and 40 people were injured. But the exact number of injuries and deaths were yet to be reported and the death tolls are expected to rise.

Videos circulating on social media platforms show fire and smoke billowing from the shopping centre. Attempts by the safety officers to put out the blaze are also seen in the released videos.

At the same time, Volodymyr Zelenskyy has informed in the G-7 Summit that the Ukraine forces are dealing with an emergency situation. He also said that he will put forward the necessity of helping Ukraine forces to deal with the Russia in a video conference with the international economic powers.

The attacks will only help Ukraine to receive help from G-7 countries including the UK, Zelenskyy added.